Source: this is a translation of a Gaz-mobilite.fr article by Michael Torregrossa and the original can be found here.

In 2020, TotalEnergies and AS 24 have significantly accelerated the rollout of their CNG stations in France. Arnaud Bellier, who is responsible for coordinating the expansion of the gas station networks for AS 24 and TotalEnergies, looks back with Gaz-Mobilité on the achievements of the past year and outlines the development prospects for 2021.

"For us, 2019 was a year of calibration of our technical capabilities and resources. A year ago, we were called PitPoint. Since then, the entity has been integrated into the rest of the TotalEnergies Company and we have developed our internal standards so that we can be optimally deployed from autumn 2019," explains Arnaud Bellier, head of gas network development at AS 24.

"In 2020, we developed our largest number of stations, despite the exceptional conditions we are all familiar with, with 7 sites opened throughout the year: our stations in Rennes and Bordeaux in February and, after the confinement, Limay, Avignon, Villefranche and Gennevilliers, then Laon shortly before the end of the year. These new installations bring the number of CNG/bioCNG stations available to AS24 and TotalEnergies customers in France to 18".

In all cases, customers can choose from several fuels: conventional CNG and its renewable counterparts, with the pump version of bioCNG 100%, bioCNG 50% and bioCNG 20%. Professionals with a credit card contract can go even further by choosing, to the nearest percent, the proportion of bioCNG they wish to incorporate in their fuel from 1% to 100%. 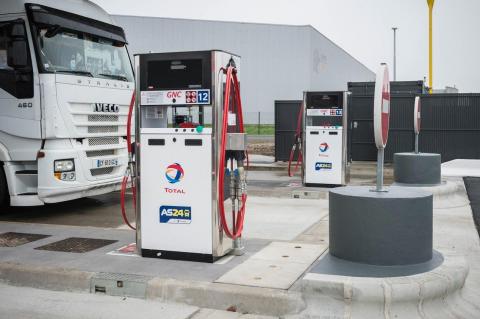 "For 2021, there are now 13 stations confirmed with implementations planned from January. Among the first to become operational this year, three new TotalEnergies-branded stations in Paris, including the Noisy le Grand station and the two multi-energy stations at Paris Pont Aval and Paris Porte d'Aubervilliers," explains our contact. Scheduled for the end of the first quarter of 2021, the latter will be the first CNG/bioCNG station located on the Paris ring road (first on the outer ring road, then on the inner ring road as the summer approaches). It is part of the vast plan launched by the City Council to develop alternative energies in the capital's service stations.

All future stations will be located in the immediate vicinity of major cities such as Bordeaux (Pessac), Grenoble (Voreppe and Meylan), Metz north, Tours north, Niort (La Crèche) and of course Paris.

While TotalEnergies and AS 24 initially focused on CNG/bioCNG, LNG is also on the agenda, with the first opening in France planned for 2021.

"On a European scale, we already have a strong presence with 16 LNG stations available," explains our contact person. "In France, feasibility studies have already been launched on certain stations and a national offer will be built over the next five years. Under the TotalEnergies flag, the Le Havre LNG station will be the first to come off the ground in the first half of 2021," explains Arnaud Bellier. "The first projects are always the hardest to deliver. What is already being done in other countries must be adapted to French regulations and the best technicians must be brought in for this specific equipment," he says.

"Operational excellence with reliable installations is the indispensable criterion for the sector to function well beyond 2025", according to Arnaud Bellier. "Customers who buy trucks today and who will be driving in 2021 will not renew them in 4 years time if the quality of the network is not up to scratch," he warns.

"On the maintenance side, we work with partners who, like us, provide national coverage and have local skills to guarantee response times consistent with the needs of professionals. Today, we offer more than 98% availability on the twenty or so stations we operate in France. In-house information arrives very quickly from the people who supervise our various distribution points so that in the event of a breakdown our relays in the field can warn customers. Our customers themselves play an active role in this reliability and can call the hotline when they encounter problems in the stations, thus guaranteeing the best possible level of reactivity. Finally, in the event of a complete station closure as part of the ongoing improvement of our network, we inform our customers in advance to propose alternative solutions whenever possible. And in all cases, information on the availability of our network is always published in real time on our Driver application and our websites."

Although they have carried out one of their most important deployment plans in France in 2020, TotalEnergies and its subsidiary AS 24 are not leaving the rest of the European market behind. With a network of more than 250 CNG stations operated or hosted, the two companies plan to deploy 200 more by 2025.

Over the year 2021, several dozen openings are planned, mainly in Western European countries. In LNG, the major objective remains to continue equipping the major European corridors.